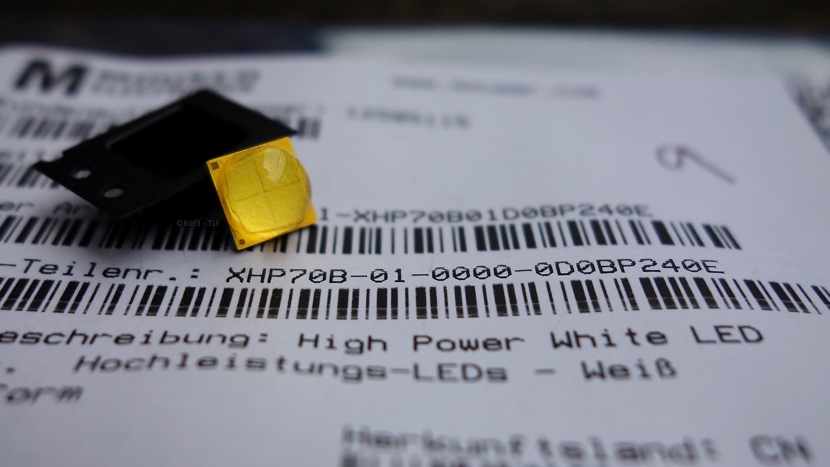 
After writing so many German LED test reports, this is now my first one also written in English.
Because English is not my native language, there could be some smaller (or bigger?) mistakes in the text. Despite that, I hope this report is helpful for all of those who want to build some lights with this big LED.


I purchased the emitter from Mouser. Unfortunately, the first sample was not working properly – the nominal light flux at binning conditions was at least ≈ 20 percent lower than stated in the datasheet.
In addition to this some of the dies already lit up at 3.2 Volts, despite missing overcurrent.

But Mouser reacted in a professional way and after a short conversation they send me a replacement, which I used for this test.

Like all new generation Cree LEDs the XHP70.2 appears yellow in color. The whole visible die including the outer surfaces is covered with phosphor; the external dimensions are 7.00 x 7.00 mm (0.276 x 0.276 in).

The footprint is the same as that of the predecessor so the whole range of accessories for old XHP footprint should also be compatible for this new LED. This allows lower development costs when updating products. 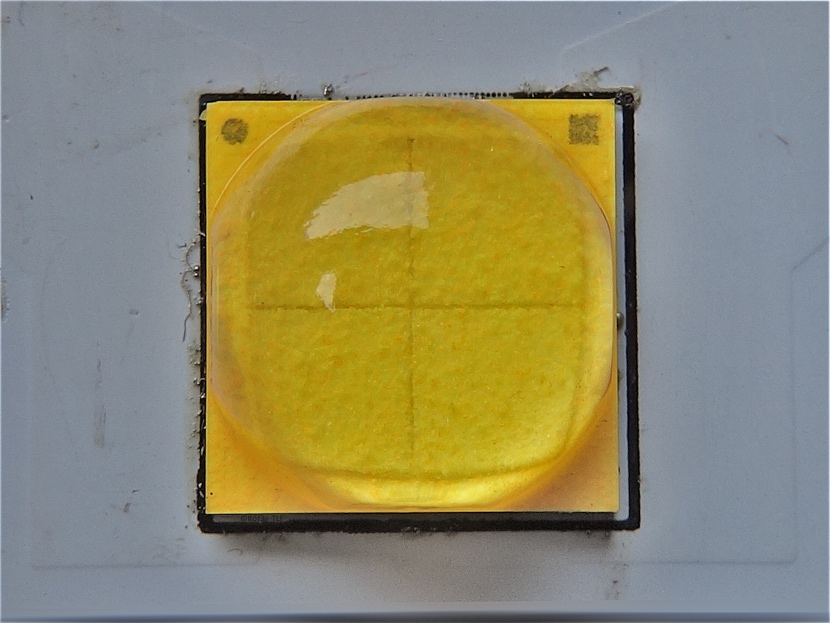 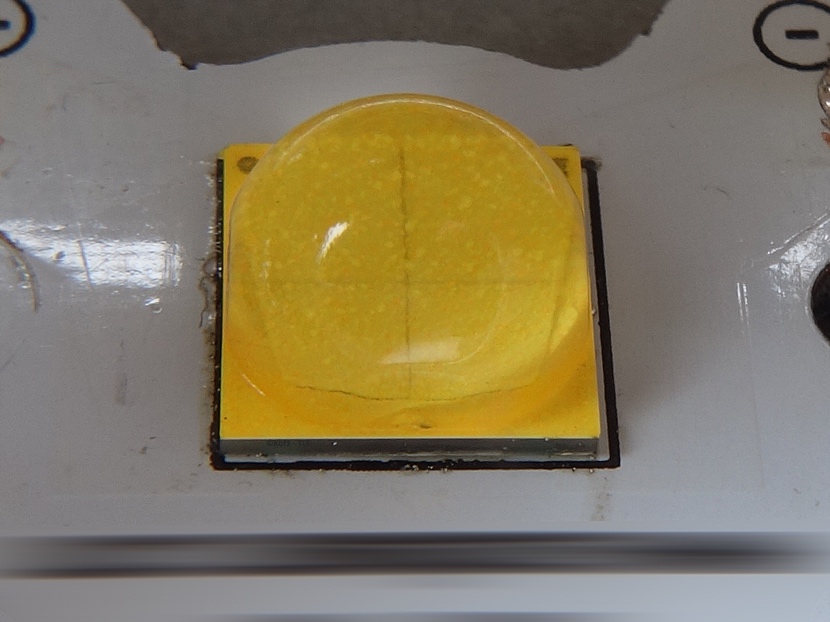 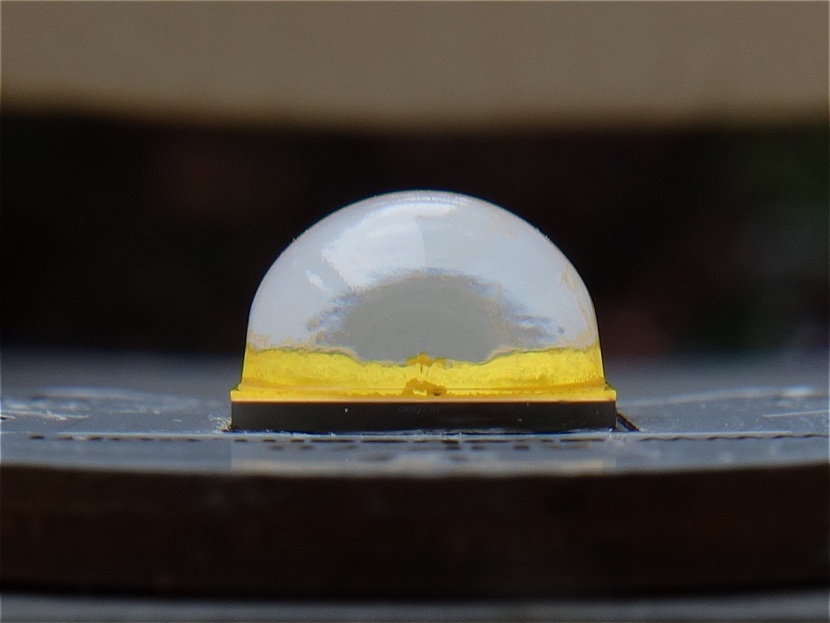 ​
On the pictures the four dies can be easily discerned.
Because of the symmetric shape of this LED it's possible to use lathe spun components for spacers or insulation gaskets.

Like the XHP70 the needed voltage can be set via the LED PCBs electrical layout. All available XHP70 and 70.2 are suitable for 6 or 12 V forward voltage.
If the middle contact on the LED (thermal pad) is isolated from anode/cathode electrically, the LED runs on 6 V config (2S2P). Otherwise, if the thermal pad is connected with anode/cathode, the LED runs on 12 V config (4S4P), which halves the needed current.

The visible light emitting surface area is bigger than that of the XHP70 – but the gaps between the four dies are noticeably smaller, too. Because of that, the surface brightness density should be lower despite the higher possible lumen output. 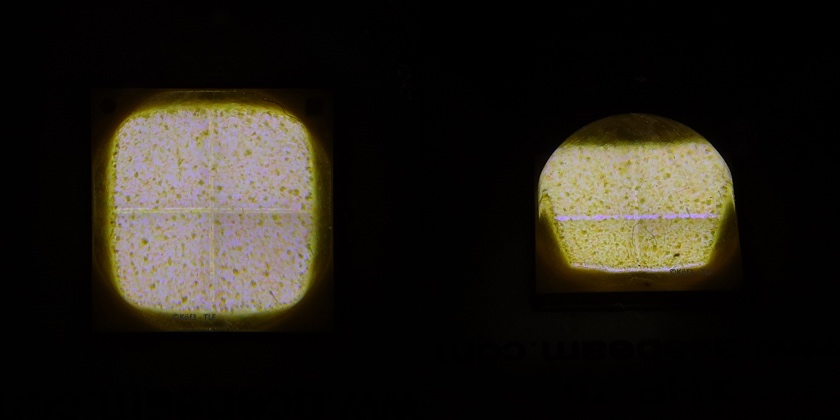 Typical for the new Cree LEDs is the blue-yellow-dotted phosphor layer on the surface, and the yellow layer around the dies. The gaps between the single dies are small and also covered with phosphor. Because of this they emit too light. 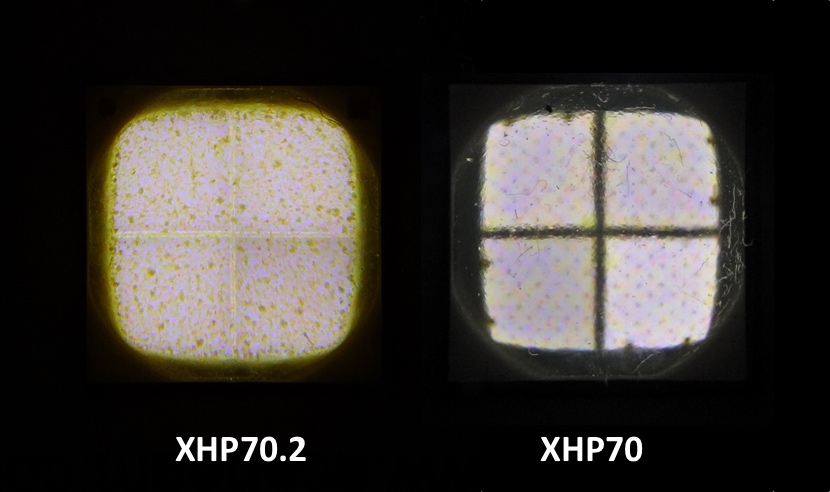 I compared this LED with other popular emitters, like XHP50.2/70 and MT-G2. 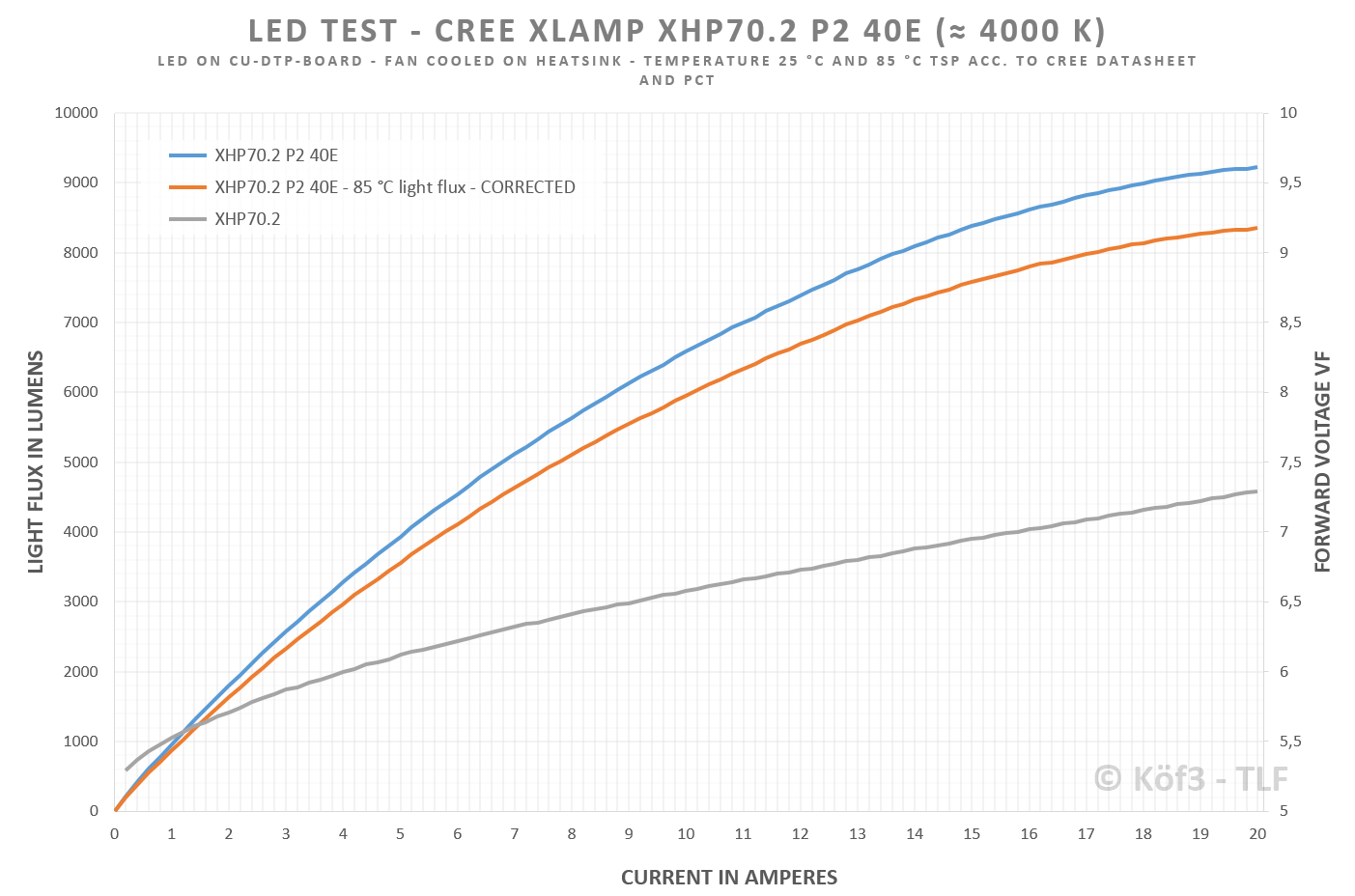 Currently I cannot measure the luminous flux at 85 °C directly. So I had to calculate the flux for hot binning (85 °C) acc. to the specs in the datasheet. From 25 °C the decrease to 85 °C in luminous flux is around 12,5 percent.

Overcurrent:​
I define the sweet spot as the position in diagram which gives a good average between light flux, current and efficiency. 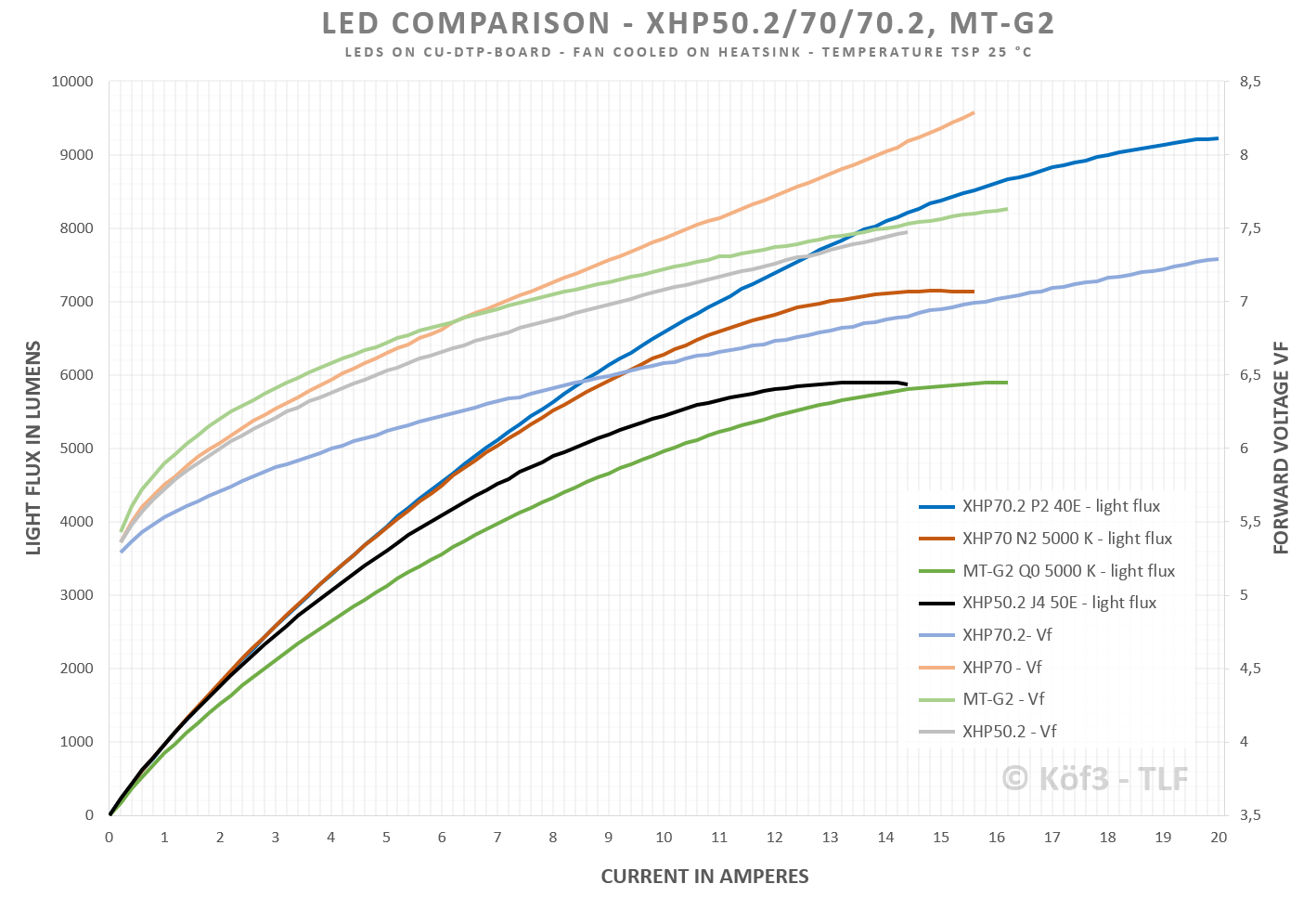 The XHP70.2 performs much better than all other tested LEDs here. The overcurrent capabilities are better and the light flux maximum is at over 20 amps – the maximum range of my power supply.
Moreover, the Vf is a lot lower than that of the other emitters.

The XHP50.2 is more efficient than the MT-G2 and reaches the same light flux maximum, but at lower current. This is a clear sign that the MT-G2 is outdated and shouldn’t be used in new designs anymore. (maybe if superior color consistency without artifacts in light pattern is required.)

The XHP50.2 used in this diagram is measured with bin J4. This is a sign that the XHP70.2 actually emits less total flux than stated in the datasheet for this bin.

The measurements here were done in a totally dark environment, with no reflections on the lux meter.

Caution:
Because of the lower light flux/binning of this emitter the measurements aren’t fully consistent to XHP70.2 to the P2 bin.

The surface brightness of the XHP70.2 is higher than that of the XHP70, but it profits only from the higher maximum current and the higher luminous flux, resulting from this.
At lower currents the XHP70 performs a bit better, simply because of the smaller light emitting surface.

Light quality and use in optics​

The newest generation Cree LEDs (XP-G3/L2, XHPxx.2) are similar to each other. The all create a yellow-tinted corona around the spot when it's used in conjunction with reflectors and clear lenses.
With this LED it’s the same. To show you this problem in a more practical manner I put the tested emitter in a flashlight which is normally used with a XHP70. It delivers round about 2800 lumens with one 26650 and is equipped with a OP reflector, what should improve the light pattern. 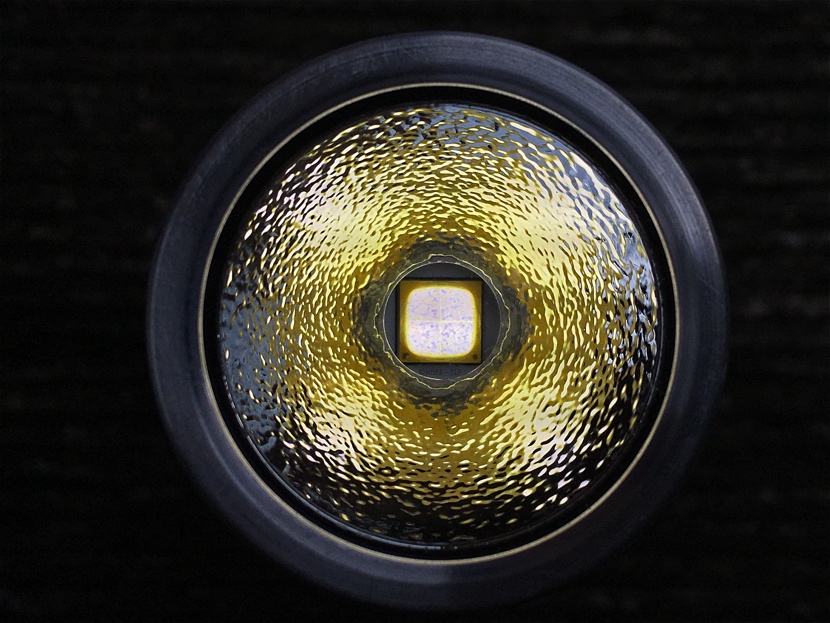 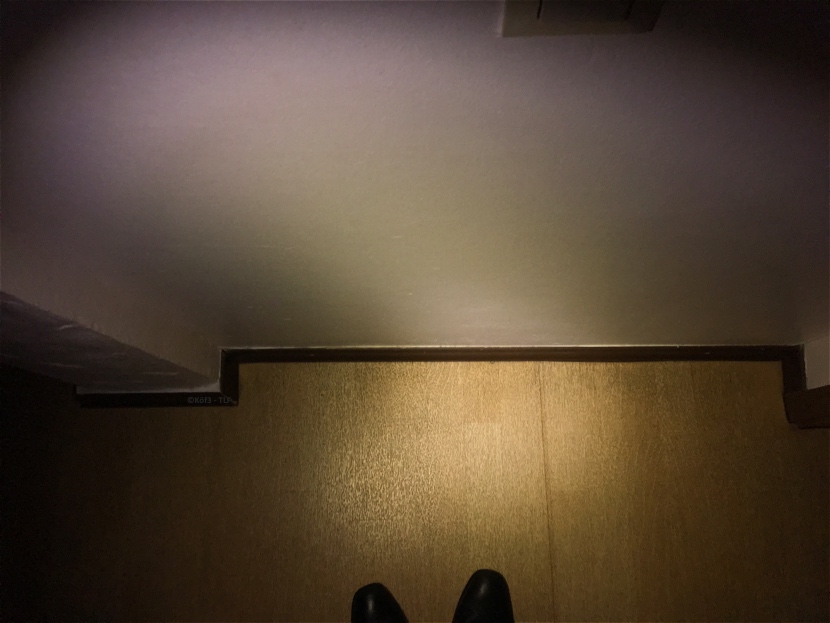 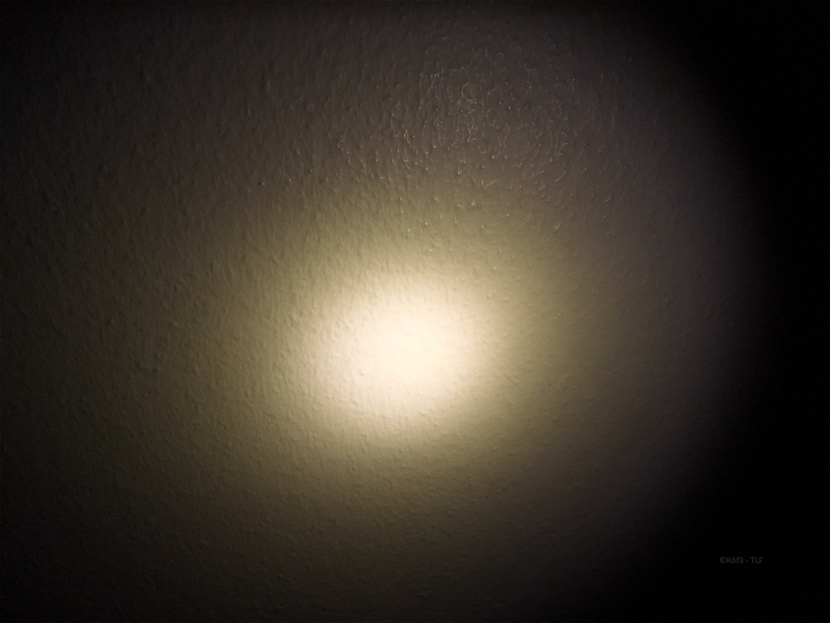 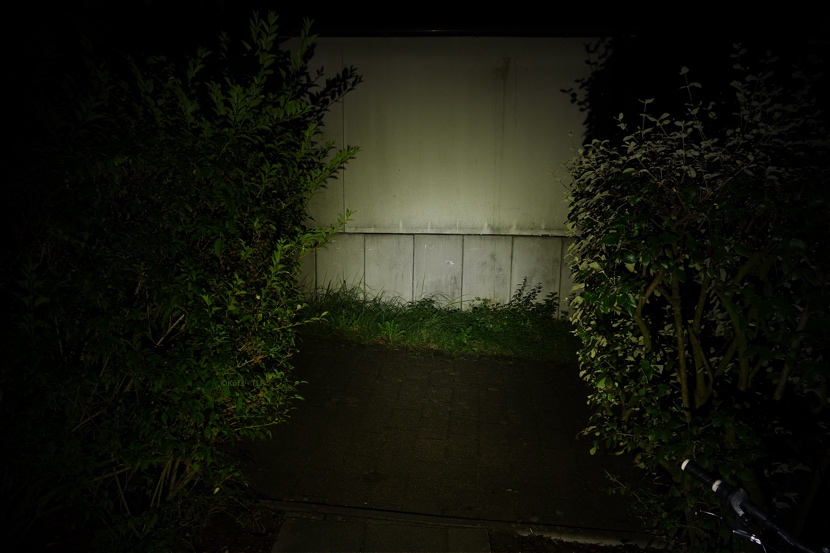 The yellow-colored corona is visible and annoying. The spot is definitely cooler than the stated 4000 K CCT - I estimate the color temperature is higher than 4500 K.
The specified color temperature can only be reached in cb (ceiling bounce) situations or in optics which mix the light, like diffusors or TIR optics. In a flashlight this doesn’t happen in most cases.

But not everything concerning light quality is bad. Because of the missing “gaps” between the single dies, the known “cross” in the spot is in case of using reflectors or lenses totally eliminated and not visible anymore. This problem, known from many standard flashlights, has largely been solved through usage of special/modified reflectors or diffused/matte lenses.

The XHP70.2 is a noticeable leap in performance and overcurrent capabilities. With 9228 lumens and 146 watts makes this one of the brightest power LED available today.

The light emitting surface is bigger than of the XHP70, in addition to this the beam pattern not only on the whitewall isn’t so good at all. The yellow rings/areas around the spot known from other Cree LEDs like XP-L2 or XP-G3 exists here too. On the other hand, the „cross” known from it’s predecessor XHP70 is not visible anymore.

When high luminous flux is the highes priority and the light quality (if used with optics) can be neglected, this LED is currently the best choice!


Thanks a lot for reading!