my first review of a flashlight

Introduction/General
The label Jax is so far rather unknown on the flashlight market. Since I could find no information about the manufacturer, I suspect that it is an established manufacturer, but one that does lamps on the market under a new label. Nevertheless, the information of some Chinese stores on this lamp for me were very interesting, as the Jax Z1 is the first LED flashlight i know, which is equipped with an AR-coated aspheric lens is medium size. The reviewed Z1 is equipped with the Cree XM-L 2 U2 - a recent and efficient LED - so that some good performance can be expected. The price to pay is an extremely cold white light, which comes from the lamp. Some it may disturb others will like it. Alternatively, a model with Cree XM-L2 T6 3C is available, which should radiate neutral white light. The Multi-Group-driver that regulates constant boosts the flashlight to about 1100 lumens. For long runtimes a battery extension tube for two batteries is available. The lamp is tailstand-capable and offers a zoom function by turning the bezel. More on this later in the Beamshots.

Visually, the lamp is a charm, not least due to a cover of the LED in combination with the lens. Thus, one does not see anything from the Star, cables or similar .. The bezel is actually made of coated metal. 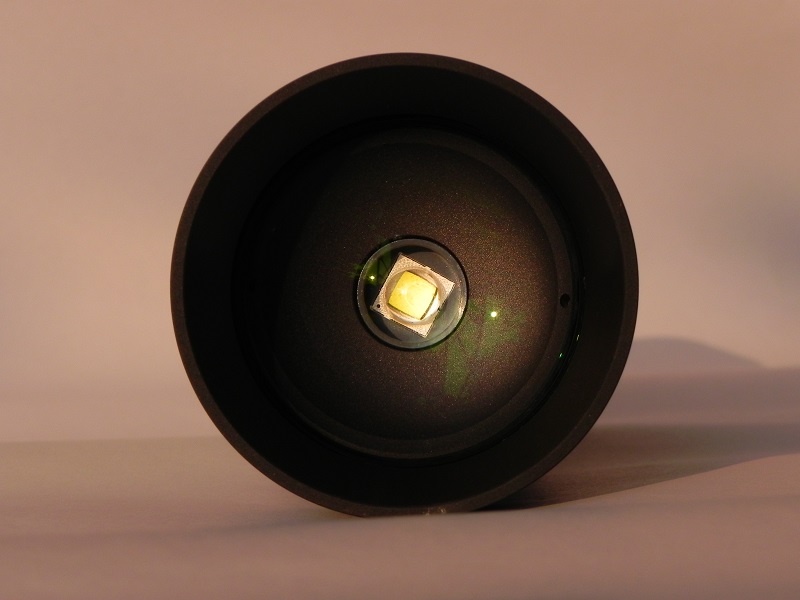 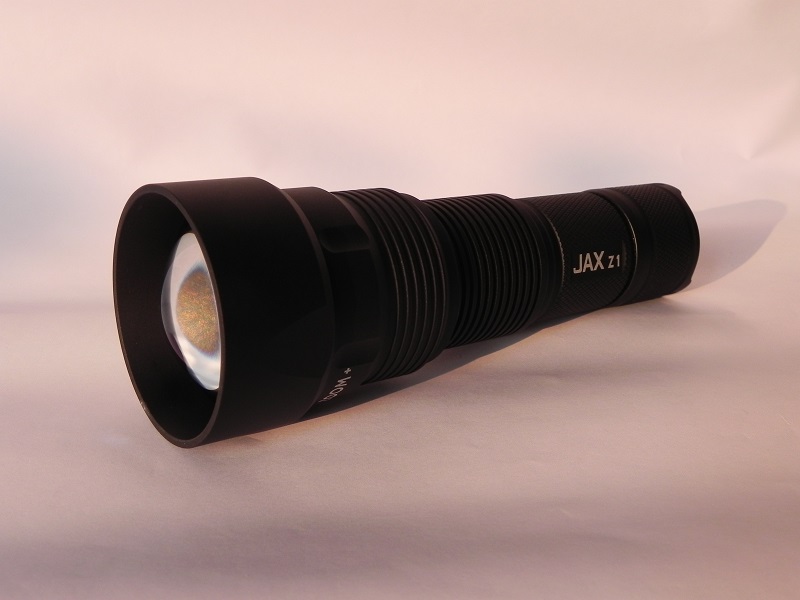 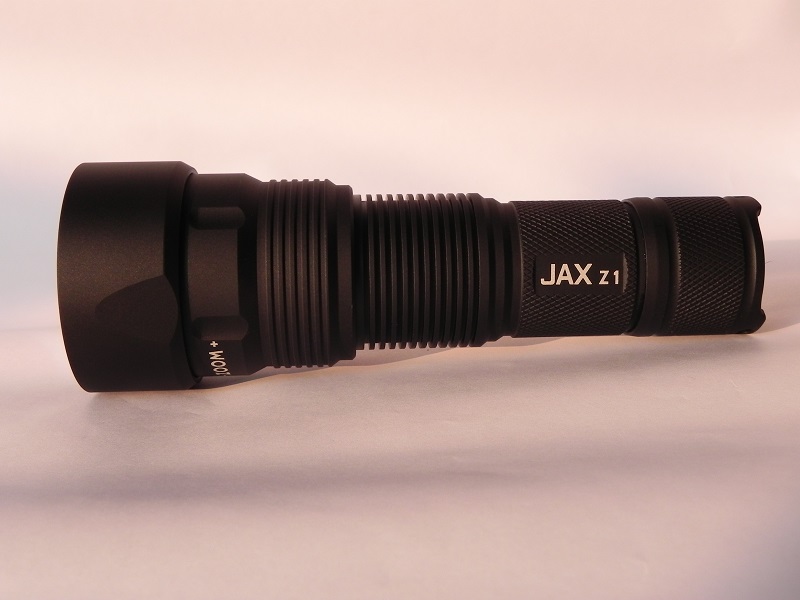 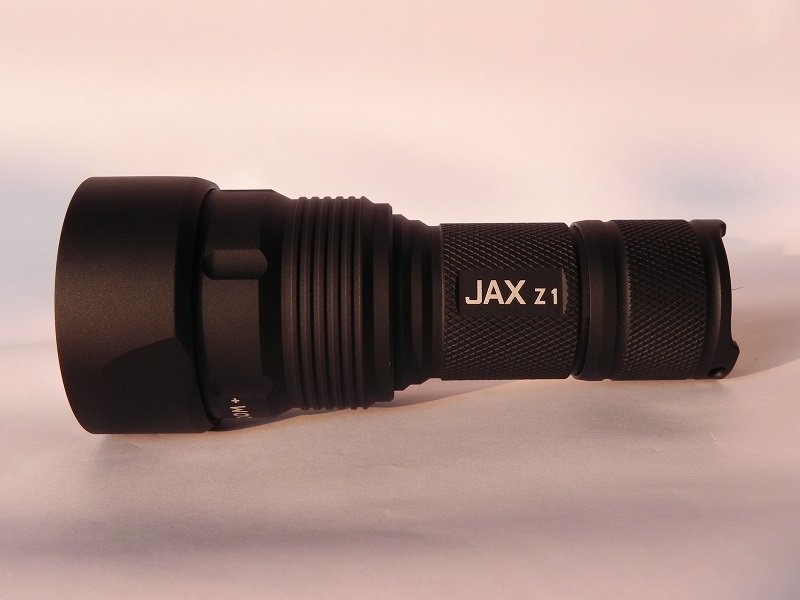 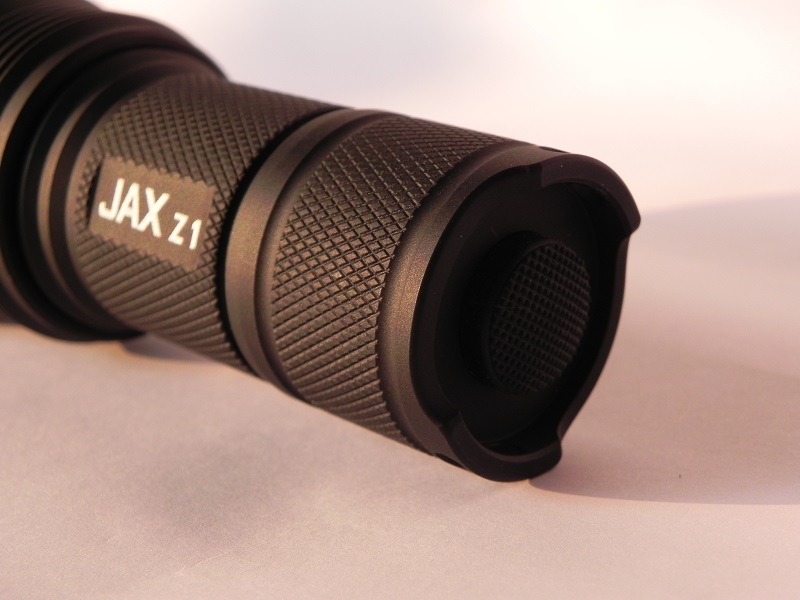 Scope of delivery
The flashlight came in a simple cardboard box wrapped in bubble wrap. The head and the lens were additionally protected by paper and foam. In addition to the flashlight there are a switchrubber and a O-ring supplied. A holster, a lanyard, or at least a hand strap are not included, which would be justified by the price of the lamp in my view entirely.

You might want to buy the extender for a few euros separately. 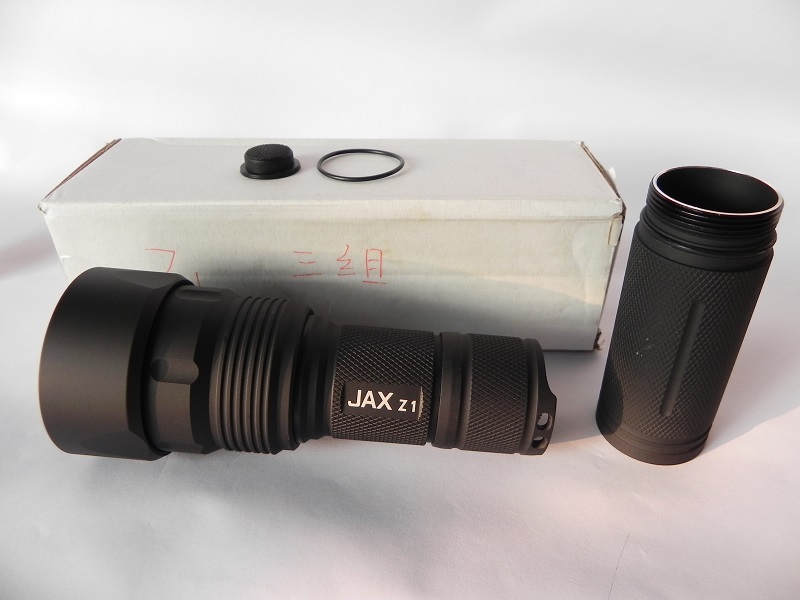 Here, once with and once without the extender. Protected batteries fit easily with the lamp, as without extenders. 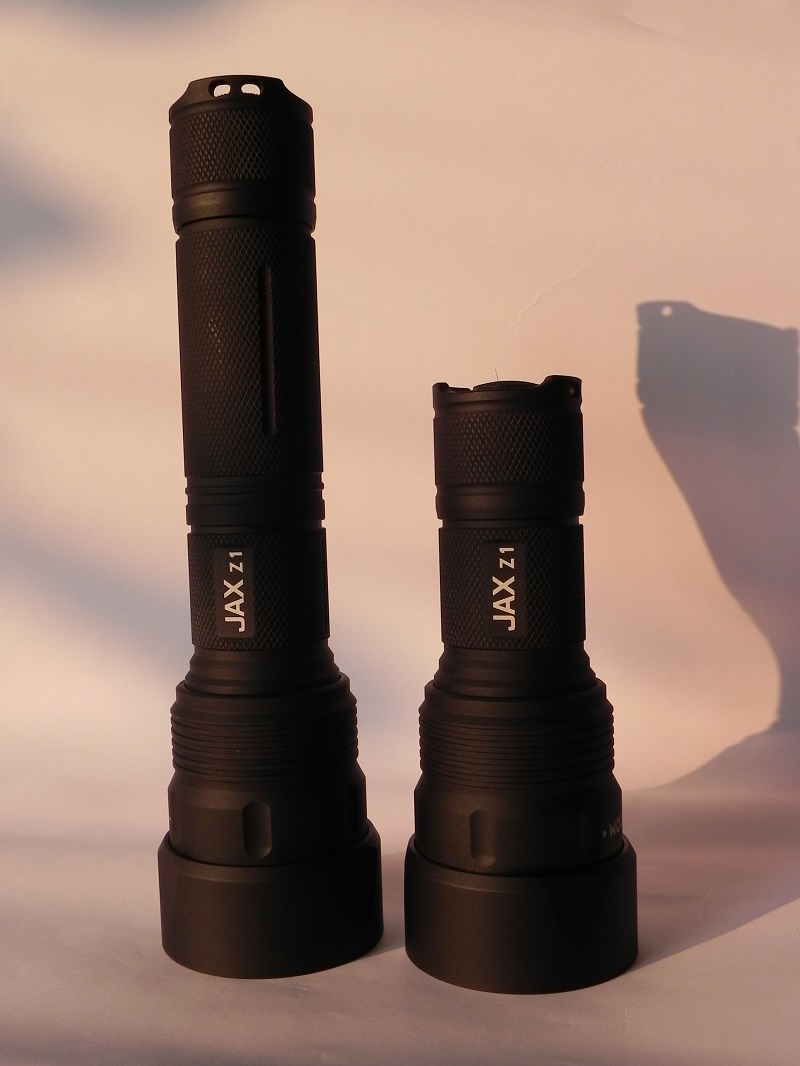 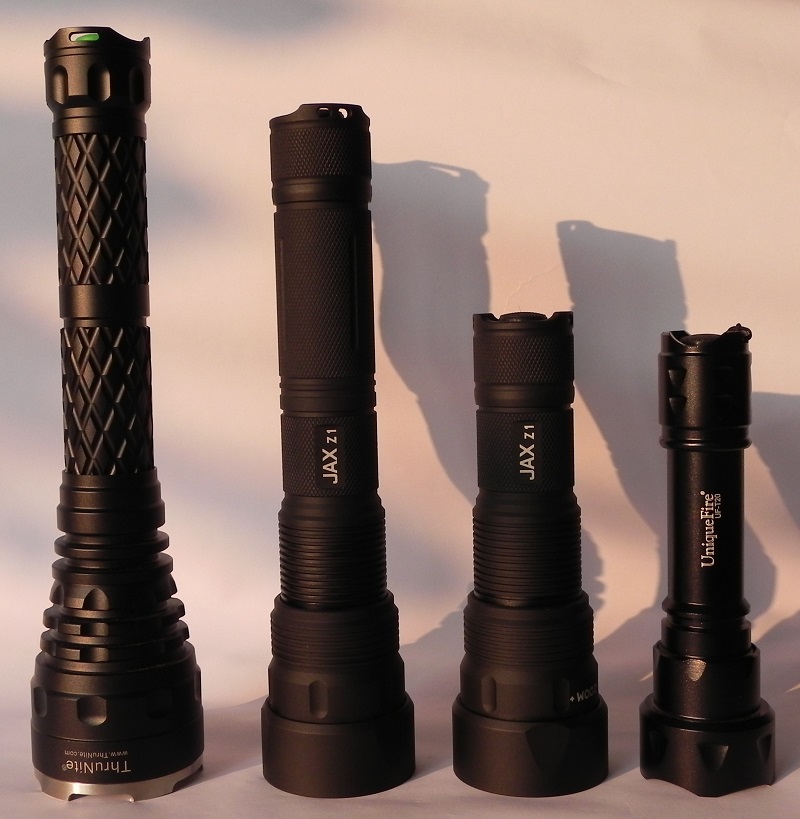 Lux Measurement
With a iClever LX1330b I measured in the focused state on 6 meter distance and converted to 1m 43 Klux. This corresponds to a range of about 414m (ANSI).


Bedienung
The lamp is not hand filling in the short version for me. Only when I focus the lamp sufficient length is available, so I can carry it completely in the hand. I think that's good, because I like so little powerlights and the astonishment, when such a small lamp breaks the night

The groups can be changed in the low mode. In Group 3 of course in High mode. After 5 seconds, the lamp blinks twice, then turn off immediately. When you turn an again you are in the next group. Unfortunately, the lamp blinks every time you switch to Low. It would be nice in my view if this would happen only the first time, when you switch to low.
The driver has mode memory.
A peculiarity is I have noticed. I linger a while in one mode and then want to change the mode, I have to switch twice. At the first time while the current is interrupted, but the mode is the same. Only on the second switch, the mode is changed.
An undervoltage warning is not offered by the driver. Momentary light is not possible.

I could not find a control by pulse width modulation (PWM).

Zoomfunction
The zoom function can be operated by turning the bezel. The head is smooth, but still sufficiently strong. The lamp will get longer for about 3cm. The exposed area of the case is by the way no thread, but cooling fins. I think that's a good thing, since the heat dissipation is improved slightly in the focused state, on the other hand, the cooling fins are covered when the lamp is defocused and should then bring virtually no cooling effect.


Quality
The flashlight feels good and worthy in the hand. The matte anodizing (presumably HA-III) is intact and the knurling makes the lamp also very handy. The threads are clean cut and greased in the area of O-rings. I've seen that a lot worse on other lights. The extender was not lubed. The wall thicknesses of the body are adequately sized and are likely good for a lot of heat absorption, despite the fact that the Pill is made of brass. I could not find sharp edged or other errors in machining.

The switch has a pleasant pressure point, but it has happened some times that I have turned off the lamp instead of changing modes. Nothing wild, but I would have mentioned it.

The heat dissipation appears to me to be well managed even despite the pill is made from brass. On the smallest and medium level although no heating is practically determined, but at the highest level, it does not take long and you can feel how the head and the exposed cooling fins heat up. The battery tube is noticeably cooler, which is quite interesting, because the battery tube is not isolated.

The aspheric lens is visibly coated, very clear and in my view, of high quality. The emitter is sharply projected in the focused condition and there are no artifacts or distortions visible. The lens is fixed at the top and bottom by O-rings.

In addition to the dust on the lens you can see the anti-reflective coating here. 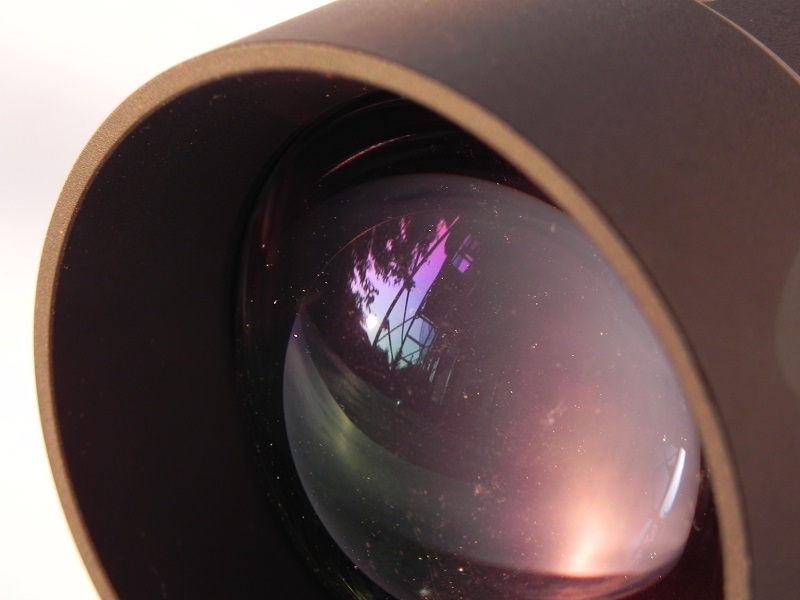 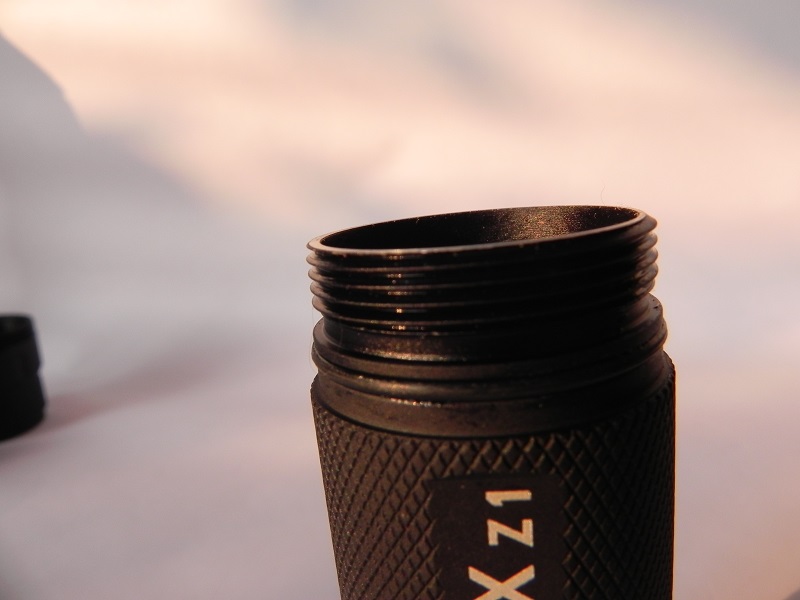 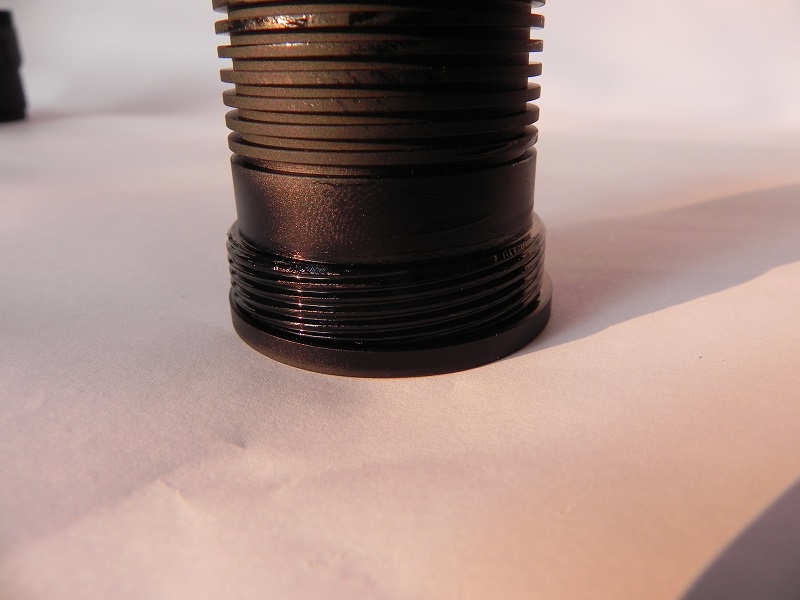 All parts of the flashlight 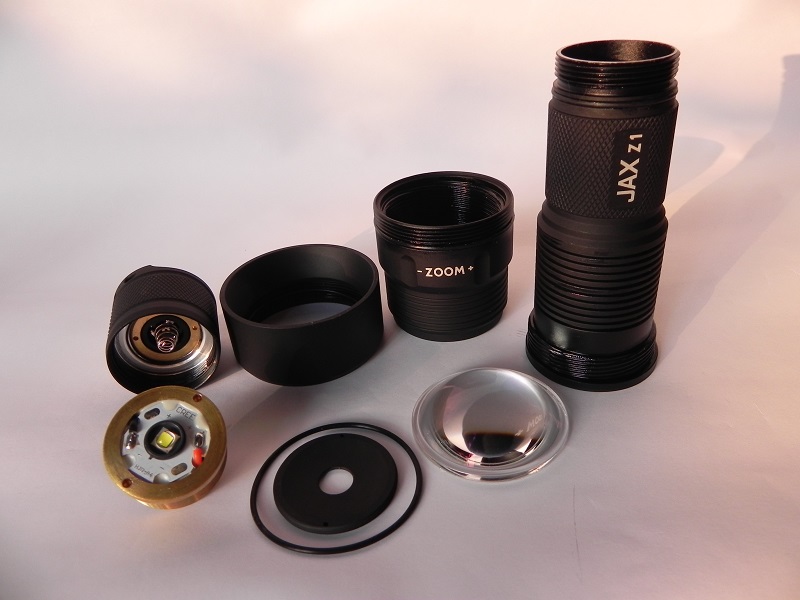 The pill is made from brass. It can take drivers up to 22mm, it is 10mm deep and takes 20mm Stars. 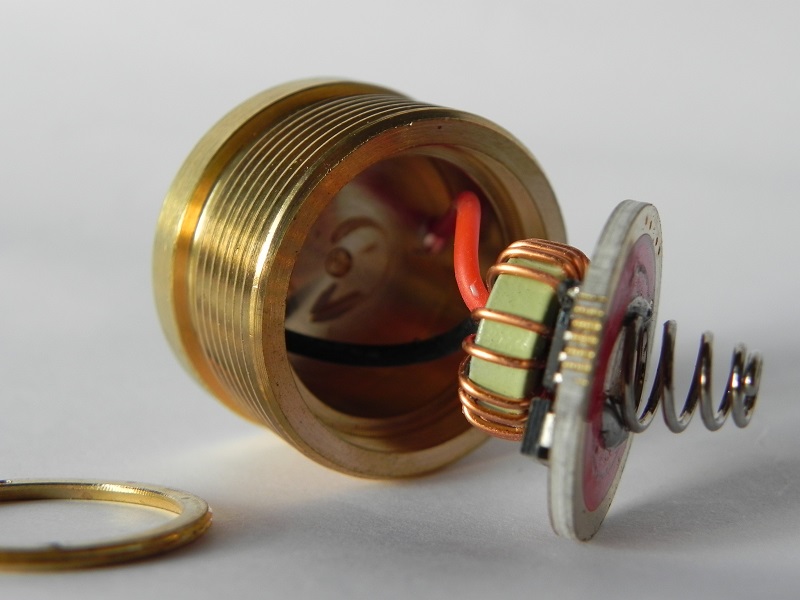 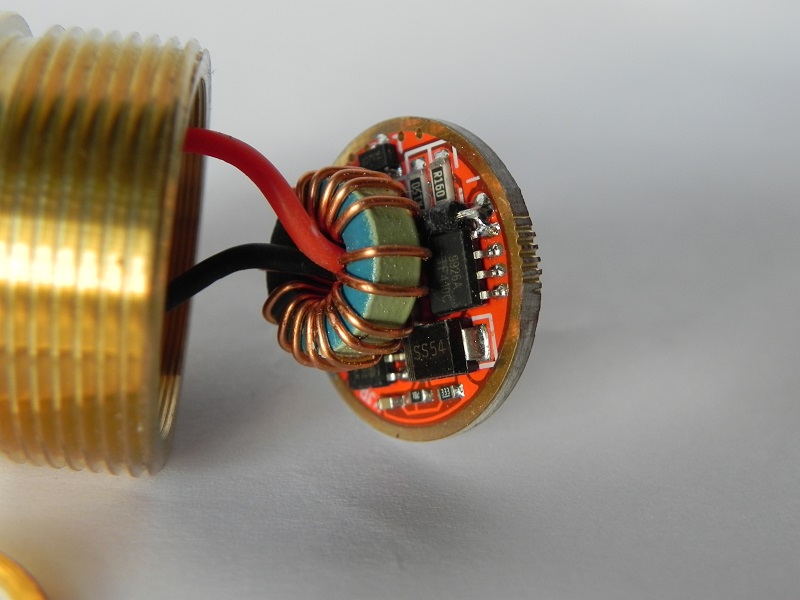 Whitewallshots
Distance to the wall is about 1m. I think the defocused state is pleasant homogeneous. 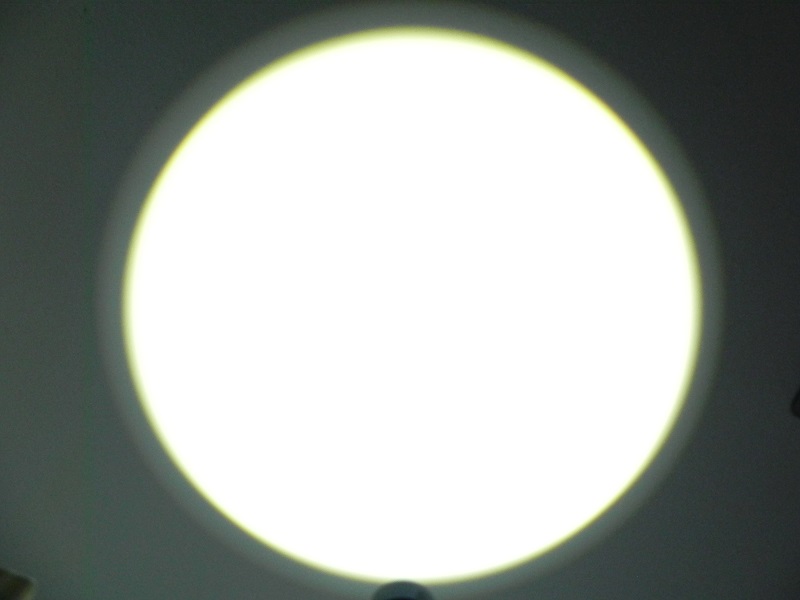 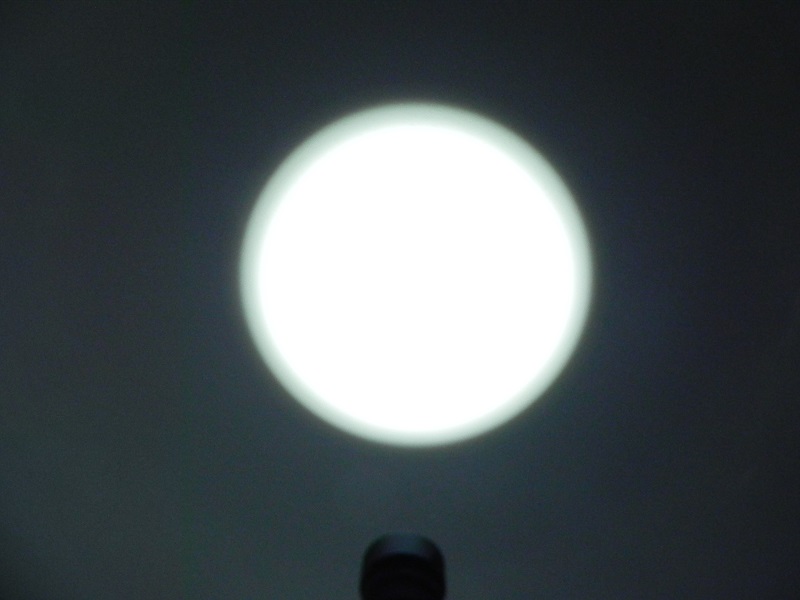 Focussed. The spot and the image of the emitter is projected clean and sharp after about 8m. 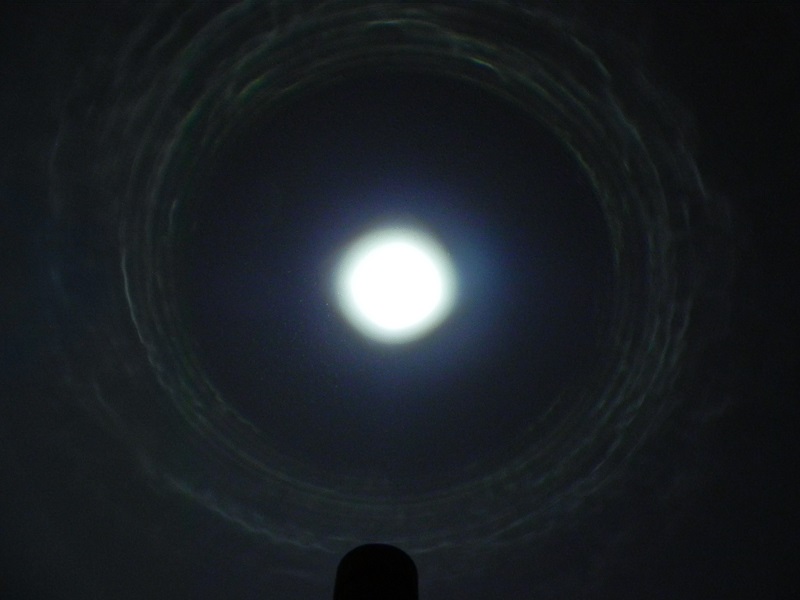 Here occurs a negative point. On the one hand it is exemplary to grease the threads of the focusing mechanism, in this case exactly that produces a few ugly rings in the photo, because the lube on the threads reflect the light. Fortunately, it is only visible in very short distances. The same goes for the centering of the LED. So beautiful it looks like, if one looks into the lamp (turned off), so ugly it is to see the reflection of it in the photo. Here again, only visible at close range. 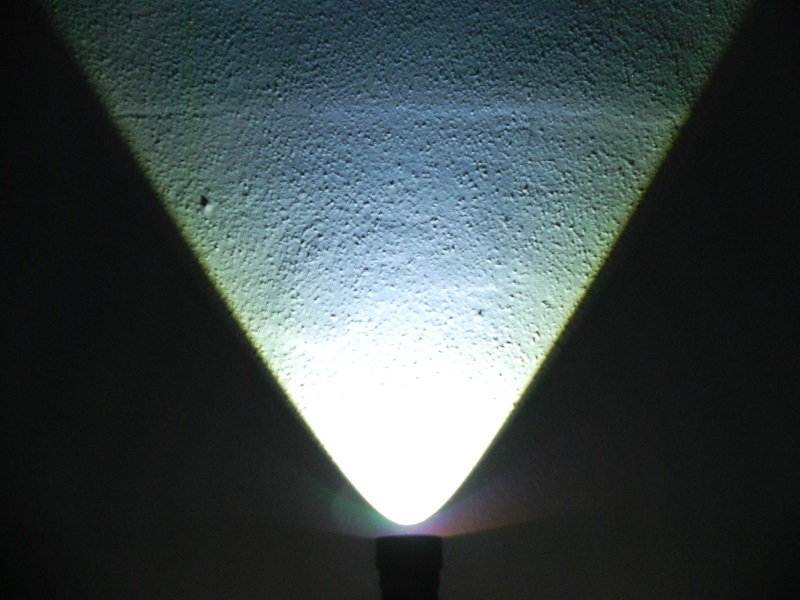 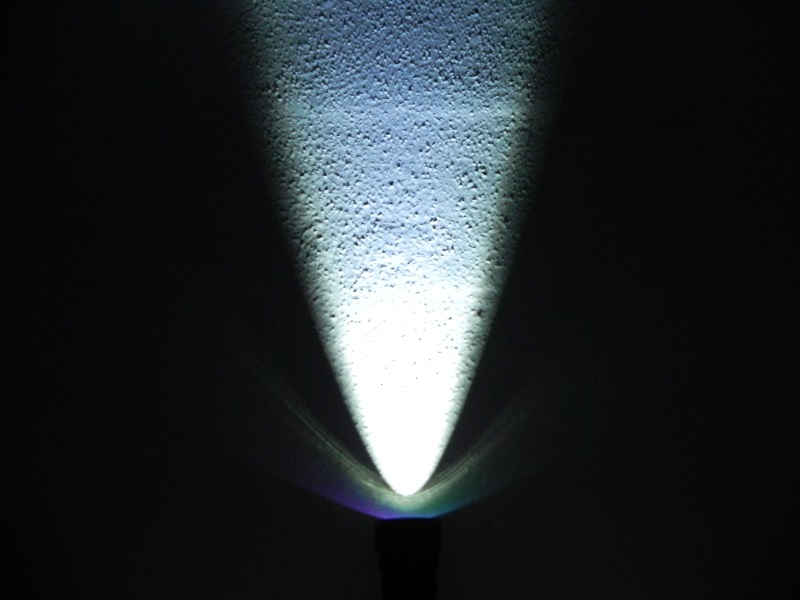 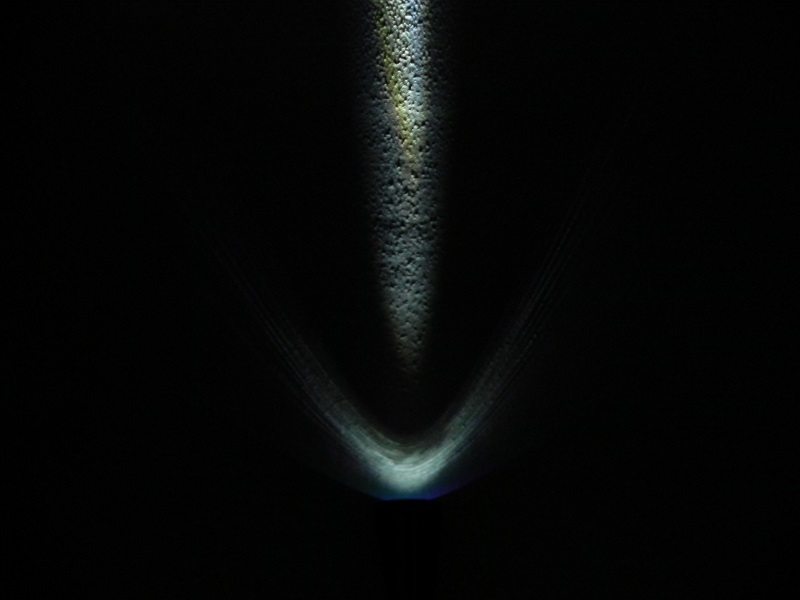 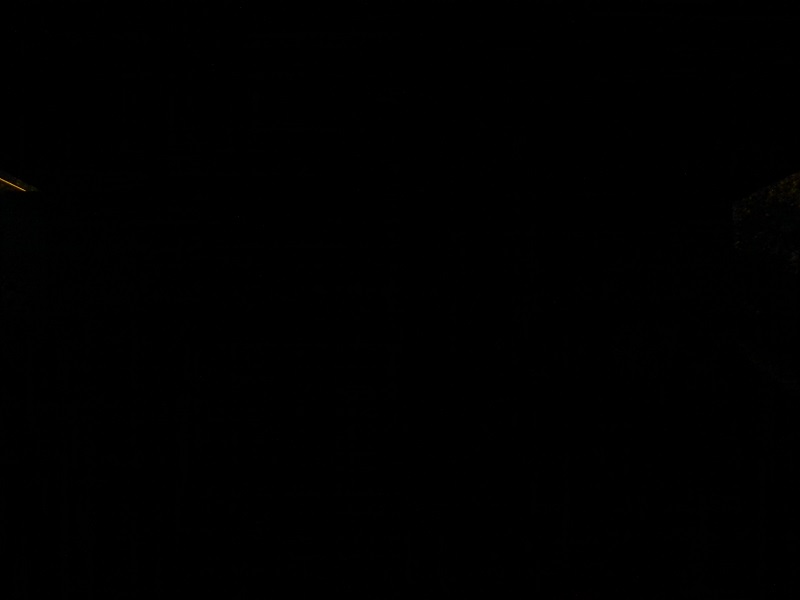 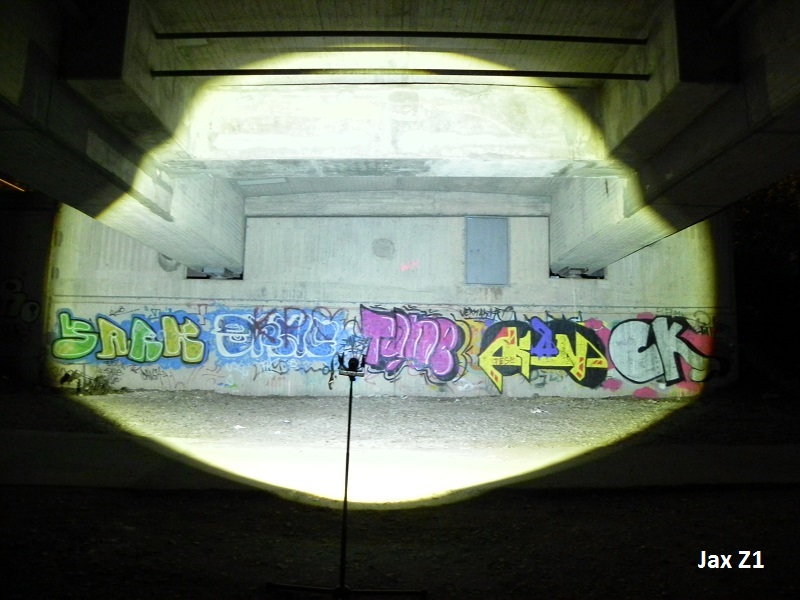 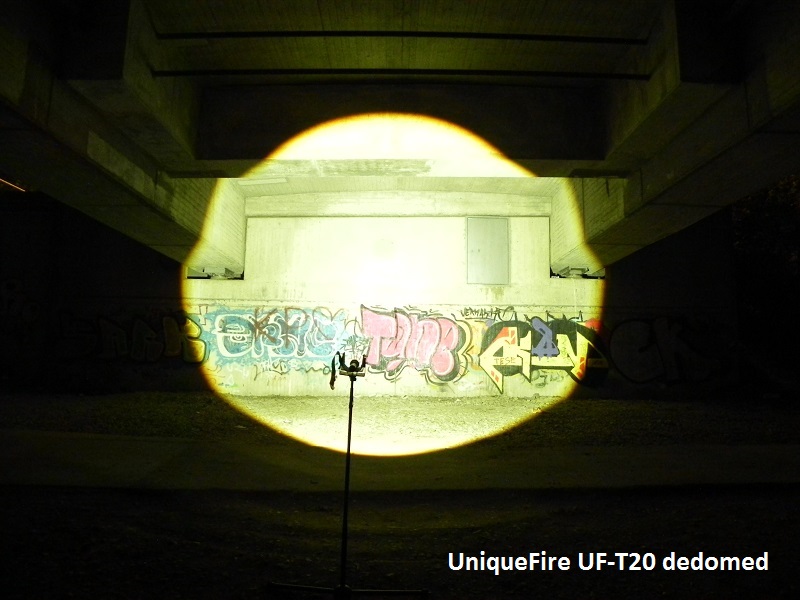 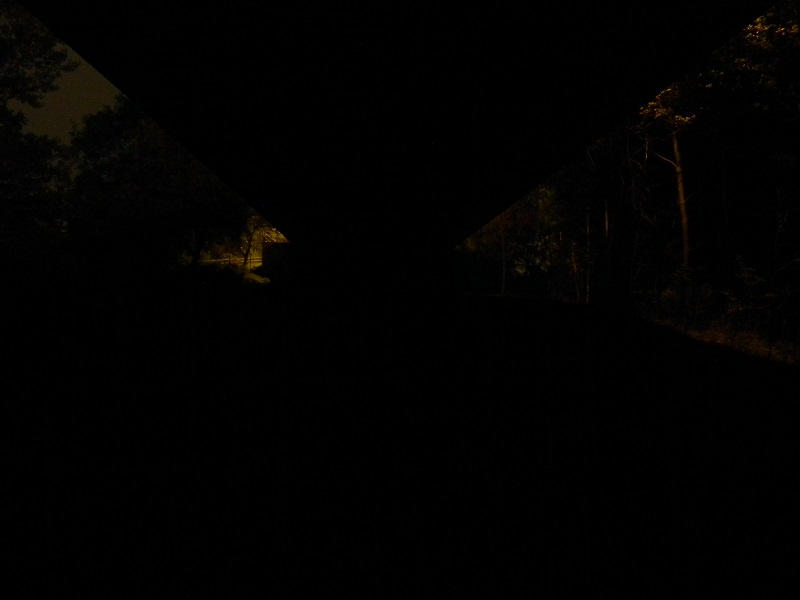 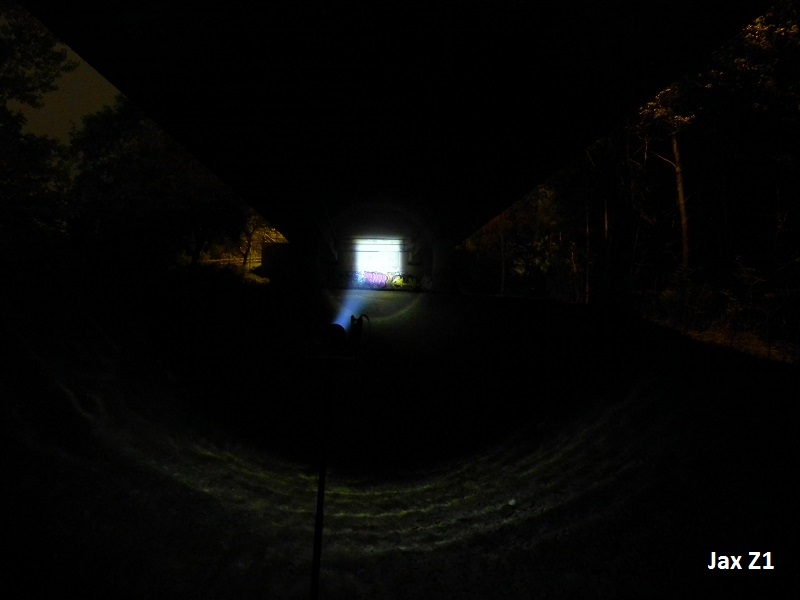 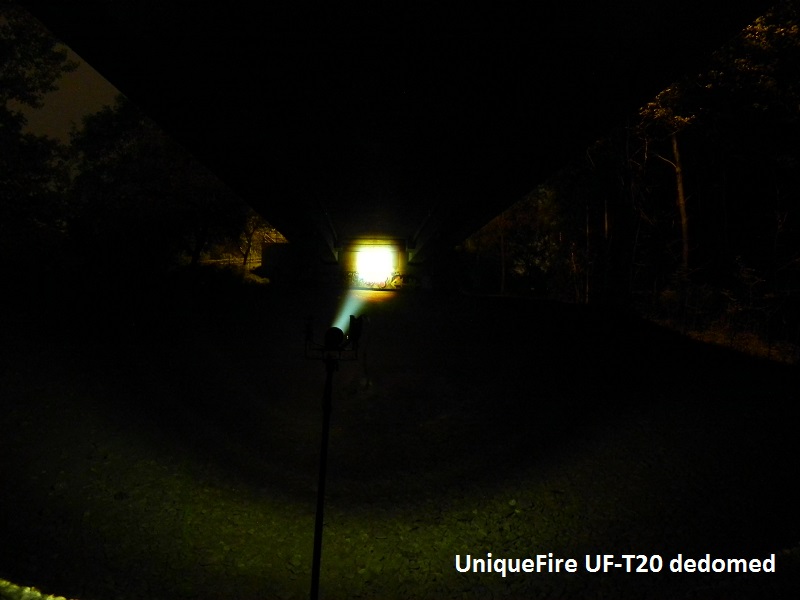 Conclusion
Now that I have the lamp a few days use, I'm quite impressed. The lamp offers not least by focusing some possibility of applications. Since it is only partially waterproof it is surely not best for hard outdoor use. But due to the size it is certainly suitable as an EDC. Should it be too heavy, one can use instead 26650 also 18650 or even 2x18350. The lack of a holster the lens should be protected if possible, because I couln´t find replacement lenses and who knows what you carry in your pockets

I can recommend this flashlight! Also, because the lamp has a lot of potential to improve the performance even better known as modding

Thank you for this great review

Great review Jonas, thanks a lot.
Looking forward to future moddings of this light!

The modded version I received from Kenjii yesterday (@5A, de-domed XP G2 S2 on copper = 225Kcd) I really like a lot.

A lot of light with either a huge floody beam or a very focussed and very far throwing beam. Or anythin in between, of course.

An excellent light that has instantly become one of my favourites.